I met up with Annie and Dad Saturday morning at the Hotel Roma in Piazza Santa Maria Novella, across from Hotel L’Orologio where Aunt Jill, Lindsey and Mom stayed in March.  I immediately took the starving souls to Wine Bar in San Lorenzo for an early lunch where young Anne enjoyed her first taste of alcohol, ever, with a glass of Chianti.  We took a quick tour of Santa Maria Novella and made our way up to Piazza Michelangelo for a photo-op while the weather was still nice.  Afterwards, we attended an Italian mass at San Ambrogio, the small church down the street from my apartment.  We had time to relax at Mom’s favorite wine spot in Piazza San Ambrogio before dinner at Acqua al 2 (Blueberry steak!). Annie and I parted ways with Father (we imagine he went directly back to the room), she stayed in my apartment while Haley was traveling.  We met with Kayna and Dee at Bigalow’s and said a brief “Ciao” to Libby at Lochness before heading in.
The three of us were in line at the Accademia early Sunday morning to see David – waiting about thirty minutes in the rain before the guy behind us started to get irritated and talked the guard into letting us in.  David looked beautiful as ever (I won’t dwell anymore on his grandeur, read the previous posts).  Annie went back to my apartment for a nap while Dad and I looked around San Lorenzo and Santa Croce, which holds the tombs of Michelangelo, Galileo, and Dante.  We picked up Annie and headed to Fiesole to see the tomb of St. Romulous and another gorgeous view of Firenze.  After the bus ride back from Fiesole, we walked to the Ponte Vecchio and did some exploring on the other side of the Arno before pizza at the famous “Gusto” in Santo Spirito.
Monday we met Dad in Piazza Republicca for cappuccino and pastries at Gilli. Annie and Dad climbed the Duomo while I went to Italian class and we met afterwards on the steps of Santa Maria del Fiore.  Dad went to Piazza Signoria to visit the Uffizi (unfortunately, it is closed on Mondays) - Annie and I went gift shopping in San Lorenzo market.  I took them to Kitsch for aperitivo and the three of us met Lena for a quick drink at Old Stove before calling it a night.
Dad and I had decided to reserve spots on an 18-mile bike tour/wine tasting of Tuscany that Tuesday – which we did without the knowledge of Annie.  Dad and I biked the whole tour, while a combination of exhaustion and on/off down pouring was enough incentive for Annie to remain in the van with Jacopo, our driver who rocked pink Supergra sneaks better than anyone I’ve seen in Italy.  The ride up the mountain was beautiful for the most part, despite the fact we were soaked for the entire event.  The tour included lunch at a vineyard and we were given a step-by-step tour of how the wine and olive oil was produced.  On the ride back we stopped for a well-deserved gelato and finished at the bottom of the mountain where the bus took us back to the center.  Annie and I went back to the apartment to dry off and grab our luggage while Dad bought the train tickets to Rome.  We met at the Art Nouveau-style café next to the station and picked up sandwiches which (in edition to Gusto train pizza) we ate for dinner en route to Roma Termini.
Posted by Elizabeth at 8:14 PM No comments:

Lorenzo de'Medici (my university, not the man) held a number of free events throughout the semester to assist in deepening our appreciation for Tuscan culture.  I attended the "Italian Dance Workshop" by myself back in February - it was fun, but would have been better had a friend been there to exchange bewildered glances with when the professor burst out with instructions such as "YOU ALL HAVE TITS NOW SHAKE EM'!"  For the next event in April, a ten mile hike through the hills in Fiesole, I asked Lena if she would join me to avoid any feelings of inner awkwardness should the same dance professor be our tour guide.  The hike was leisurely, it took about four hours.  The nicest part was realizing how nature feels the same everywhere you go -  Fiesole could have been where my 4th grade Girl Scout troop hiked in Connecticut or Rocks State Park in Harford County.
Posted by Elizabeth at 2:30 AM No comments: 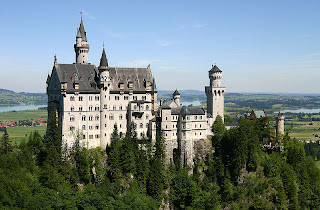 We made it to the hostel later than expected Friday night - thank you again, GPS (it wasn't so bad actually, we would have been much worse off without it) - and turned in early.  Two guys in our room, Grant and Randall from Texas, accompanied us at 5.30 the next morning on the two hour drive to Neuschawstein Castle.  For a quick Wikipedia description - Neuschwanstein Castle is a 19th-century Romanesque Revival palace on a rugged hill above the village of Hohenschwangaunear Füssen in southwest Bavaria, Germany. The palace was commissioned by Ludwig II of Bavaria as a retreat and as an homage to Richard Wagner (who Ludwig was completely gay for - that's from me, not Wiki). The palace was intended as a personal refuge for the reclusive king, but it was opened to the paying public immediately after his death in 1886.  Fun fact - is also the castle they based Cinderella's castle in Disney off of.  After the castle, the five of us drove north to visit the concentration camp in Dachau. It was an incredibly eye opening experience everyone should have at least once - but I never need to see another one.


We were drained by the time we returned to Munich Saturday afternoon.  We walked around a little and had a typical German meal downtown - sausage, beer, and pretzels with mustard - perfect!  That night we went out to a bar and met two local Munich girls who got us into an underground electronic club.  It reminded me of the SNL German parody - with light up squares on the floor and robot-esque dance moves.  Sunday morning we walked around the English Gardens while eating some more big pretzels with mustard.  We took the free walking tour of Munich in the afternoon, afterwards Katie and Haley went on the Munich beer tour/pub crawl and I found a mass for Easter. We all met up later and had some wine with our new tour friends at the hostel.  To save a few euro we spent Sunday night in the car (which was more comfortable than we thought it would be) and woke up early for the drive back to Frankfurt-Hahn, arriving back home in Firenze by late Monday afternoon.
Posted by Elizabeth at 12:27 PM No comments:

Haley (my roommate) and I had booked flights to Frankfurt in early February to spend the long Easter weekend (April 1-5) in Germany.  There was not much research done before we decided to book (and with RyanAir, once you buy the ticket you can't change anything) so as planning began a in mid-March we were a quite disappointed to discover that:
1) There is nothing to do/see in Frankfurt which is mostly industrial
2) We were flying into Frankfurt-Hahn which is about an hour away from Frankfurt anyway
3) The trains in Germany are unbelievably expensive and the cheapest option would have been the three day Europass which still cost around €270
4) A car rental would be cheaper, but as both Haley and I are under 21 this was not an option
5) The two cities we wanted to visit - Munich and Berlin - were about 5 hours apart.
Okay, so now we're both a little panicky and our only goal is to make this trip as little of a disaster as possible.  In art history later that week, Becca, Katie and I were discussing our travel plans when Katie (who, by the way, is 21) says that she still has nothing booked for Easter and, oh, wouldn't it be nice to go somewhere different like... I don't know, Germany?  So two days later Katie is booked on our flight and with new possibilities of a road-trip the real planning could begin.
I asked Grammy to contact her cousin Ralph - a member of the "Walz" (Gram's maiden name) family living in PA but still in communication with our German cousins - if he had any suggestions for my trip, ancestor/family wise.  He was kind enough to contact our Walz relatives still living in a town called "Grunsfeld" who said they would be happy to give Haley, Katie and I a tour.  We arrived in Grunsfeld Thursday afternoon after the GPS took us on a 3 hour detour through Nuremburg (the drive was supposed to take 45 minutes) and met Herr Weinmann, a family friend of the Walz's and our tour guide for the evening.  He spoke only a small amount of English so also accompanying us as translator was my distant cousin, Maritess, who was 18 and studying English in school.
We were shown around the town church, museum, and cemetery before being invited to the Vollrath's (Maritess' family) house for dinner.  We had intended on spending the night in a hostel in Wurzberg, about 20 km away, before making our way to Munich Friday morning.  The Weinmann's and Vollrath's invited us back the next morning to see another chapel and also Maritess' mother's town about 5 minutes up the road.  Having the car made us very flexible and we were delighted to return to Grunsfeld on for a morning of tours and Good Friday lunch at the Vollrath Haus.
On the way to Munich that afternoon we stopped in a medieval city along the Romantische Straße (Romantic Road) called Rothenburg.  Every building was perfectly restored to look as it had in the Middle Ages.  The shops were closed for Good Friday, but we were able to take pictures and buy our postcards before moving east to "Munchen".
Posted by Elizabeth at 11:23 AM No comments:

Elizabeth
I began practicing yoga in 2006. In the years since, my experience with yoga has grown from post-running stretch, to intense exercise, to a full on lifestyle commitment. I received my 200-hour Yoga Certification in August of 2010 because I found teaching to be the most effective way to share yoga's limitless physical and psychological benefits.